After my TPK at the last Adventures Dark & Deep game I ran, I'm ready to start over.  This time, I'm doing things differently.  For the most part, while I enjoy reading Zak's blogs, there wasn't a whole lot other than entertainment that I took away from it.  Then Vornheim came out.  I used it for the adventure that resulted in the TPK (a result of poor decision making on the players part, partly forced by a lack of obvious options given on mine) and it was awesome.  It gave me a whole lot of flexibility that I've never really experienced in a game before.  Seriously, if you haven't bought Vornheim yet, you really need to.  Even if Zak's game isn't your style, use the format and concepts and fill in the tables with things that meet your style.  It's that useful.

Since I was one of the first pre-orders for Vornheim and the Grindhouse Edition of Lamentations of the Flame Princess, I got an extra Rules & Magic book.  It is a beautifully illustrated and very well constructed book.  If you don't think that the paper and the binding make a difference, well, we will agree to disagree.  The digest size is portable enough to throw in a jacket pocket when you go to Borders with your fiancee (as I did Sunday) and the feel of it almost reminds me of how I felt with my first AD&D hardcovers.  Since I've got such a beautiful product to show off (As I write this at Greenberry's Coffee in Morristown, NJ, I've got it out on the table, daring people to ask me about it) and I have clean break at the gaming table, I think I'm going to give LotFP Grindhouse a whirl.

I really liked the vibe of Vornheim, so when Zak posted his alternate idea for generating a sandbox, I took notice.  Previously, I had used the Bat in the Attic model, but that was an awful lot of work for a lot of stuff the players never seemed to bite on anyway.  With a wedding in less than a month and a full-time year-round school schedule, I don't have the time I'd like to write for a game.  Zak's method isn't lazier, but it's better targeted towards the players.  They generate the leads that I'll follow up on.  It works much better with my schedule, I think.

So, before my game tomorrow, I've got to finish my first adventure.  Something rather unwholesome stirs in the basement of a degenerate noble's manor... down the hall from a cell occupied by the PCs.

When something goes wrong, the PCs must escape and find themselves alone in an unfamiliar world... the yet-to-be-named sandbox.

Posted by Higgipedia at 4:01 PM 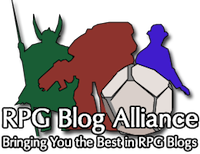 Check THESE Out As Well...